Born in Nagano Province. He was already playing guitar of bossa-nova and Latin music when studying in the University of Waseda, Tokyo. In 1971, he formed the duet «Mariquita & Jiro» with the female Latin-singer Mariquita (Mariko) Hoashi, deceased in 2003. This duet has performed at, not only all Japan, 13 countries of Latin-America in more than 200 concerts.
Actually, in addition to the musical activity as guitarist-vocalist and teacher, he presides the Asociación del Intercambio Cultural entre Latinoamérica y Japón «Amigo», founded in 1968, and produces events, concerts, etc. in Japan of the artists of different countries.

Born in Ibaragi Province. At the age of 12 he had his first guitar that was American folk-type one. Graduating in Physical and Industrial Sciences at the University of Waseda, after 3 years of working in a company, he declares himself a professional guitarist. He studied the classic guitar with Shiki Nagashima, that of tango with Aníbal Arias, that of Latin-American folklore with Carlos Flores.
After the experience and studies in the field of jazz, He enters into the big world of guitar music. He started playing the Portuguese guitar (12-stringed, tuned very differently from common guitar) at 2005.
From 1999 he has been publishing constantly the arrangements for guitar and discs, as soloistand in collaboracition.

Born 1941 in Tokyo, passed his childhood in Hiroshima Province.
At the age of 15 he fell in love with the Spanish language by listening from radio, eventually and for the first time, to an Argentine singer-actress. Being a student of the Tokyo University of Foreign Languages, he began a vast activity related to the music of the Spanish-, and afterwards Portuguese-speaking countries: as translator, journalist, essayist, radio DJ, etc.
He has published books about Argentine tango and Brazilian music and innumerable articles in magazines, etc. He had been chief-editor of magazines «La Música Iberoamericana» (now renamed «Latina») and «Paseo» (now «Paseo Flamenco») and actually of «Hola Amigos».
He was playing the guitar from age of 18 years, self-taught and never in public. Listening to Marie Mine in a chance encounter, touched deeply by her interpretation and sensibility, he became her exclusive accompanist from 2002.

Born in Iwate prefecture, Japan, in 1972. He started to learn the violin from 8 years old, and studied classical music at The Kunitachi College of Music in Tokyo.
After the college, he studied composition, arrangement and jazz improvisation at The Liverpool Institute for Performing Arts in the UK. His graduation work, “The Sunspot”, was performed by members of The Royal Liverpool Philharmonic Orchestra in 1999.
After the UK, he stayed in Buenos Aires for four month, and studied a way of playing Tango under Fernando Suárez Paz, who used to be a violin player of Astor Piazzolla quintet. During the stay, he performed with local musicians in several tango shows.
He began full-scale musical activities as a professional violin player from 1999. He presided over a Tango group “The Tangophobics” from 2000 to 2004, and made live performance in all parts of Japan. Besides this activity, he participated in recordings and concert tours of many tango musicians residing in Japan.
Engaging in the activities as a tango musician, he simultaneously extended his field of activity, such as Jazz, improvised music, Arabic music and so on. And he played together with performers from different artistic fields, such as Japanese traditional music, contemporary art and dance. As a turning point, he produced an album “Viohazard” in 2006, focusing on original music. He wrote lyrics for several songs recorded in this album.
Contents of his recent performance include a blend of original music and the improvised music.
His home-page in English: http://www.airplanelabel.com/kita/

Player-composer-arranger born 1955 in Tokyo.
He began his music life as free jazz player. He has been mixing himself and his music with very diverse genres of art, such as: Dance, Theater, Plastic arts, Visual arts, Japanese calligraphy, Japanese traditional music, Japanese ancient court music, Noh music, Argentine tango, Jazz, European improvisation music, Korean Culture, Asian shamanism . . . In his repertoire there are also Argentine folklore and Brazilian music.
He has produced many CDs in Japan, Korea, France, USA and Canada, as solo player and co-working with other musicians of different styles.
In various occasions, like at Avignon, he was invited to play in International Contrabass Festivals. 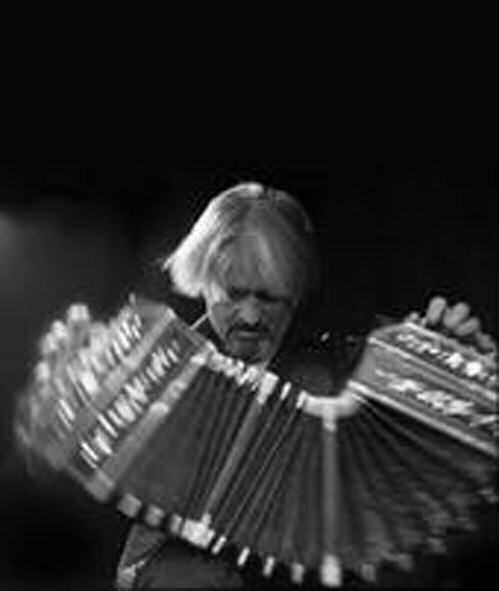 Player-composer-arranger born 1953 in Tulle, Limousin, France.
In his childhood he moved with his parents to Paris. He played "cabrette" (bagpipes) at folk-music gatherings in the Bastille area bars where a lot of people from Auvergne lived. He studied painting and sculpture at the École Nationale des Beaux-Arts in Paris and paralelly Modern Literature at the Sorbonne University. But he never parted from the music.
He became an instrument maker building violins, violas and baroque and folk instruments.
Then he started playing bandoneón and became bandoneón tuner and restorer. He now concentrates exclusively on playing turming professional on 1979.
From then he plays, in unaccompanied solo or in group, not only tango but jazz, brazilian music, European improvisation music, etc. He also composes, arranges and plays for TV or contemporary dance theatre.
His home-page is in English : http://manoury.club.fr/index.html/index.html

Back to the COVER