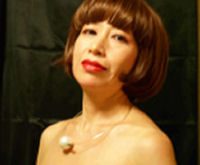 I was born in Tokyo.
I began singing in 1983 with French songs.
Later I fell in love with the songs in Spanish, by listening to the discs of an Argentine tango singer, Roberto Goyeneche.
So I began studying the Argentine tango with the pianist-arranger Hiroyuki Iwasaki.
From 2000 I studied the bolero with the singer Yoshiro Hiroishi and from 2005 diverse Latin-American genres with the guitarist-singer Hidejiro Mimura.
In addition to those studies I've learned and am always learning many things from the records of great artists of all the times.
Actually I'm singing mainly with guitarists.

Principal concerts:
July of 2004, First solo recital, at the Small Theater of Art, in Nakano, Tokyo.
December of 2004, Flamenco song concert, at «November Eleventh» in Akasaka, Tokyo.
February and June of 2006, Fado concerts, at the Municipal Hall of Urawa, Saitama.
November of 2006, 2nd recital "por lágrimas . . .".
*There's a link for the video of the recital. Click HERE.

Discography:
"Marie Mine / por lágrimas . . ."
My own production. For the details of this CD click HERE.